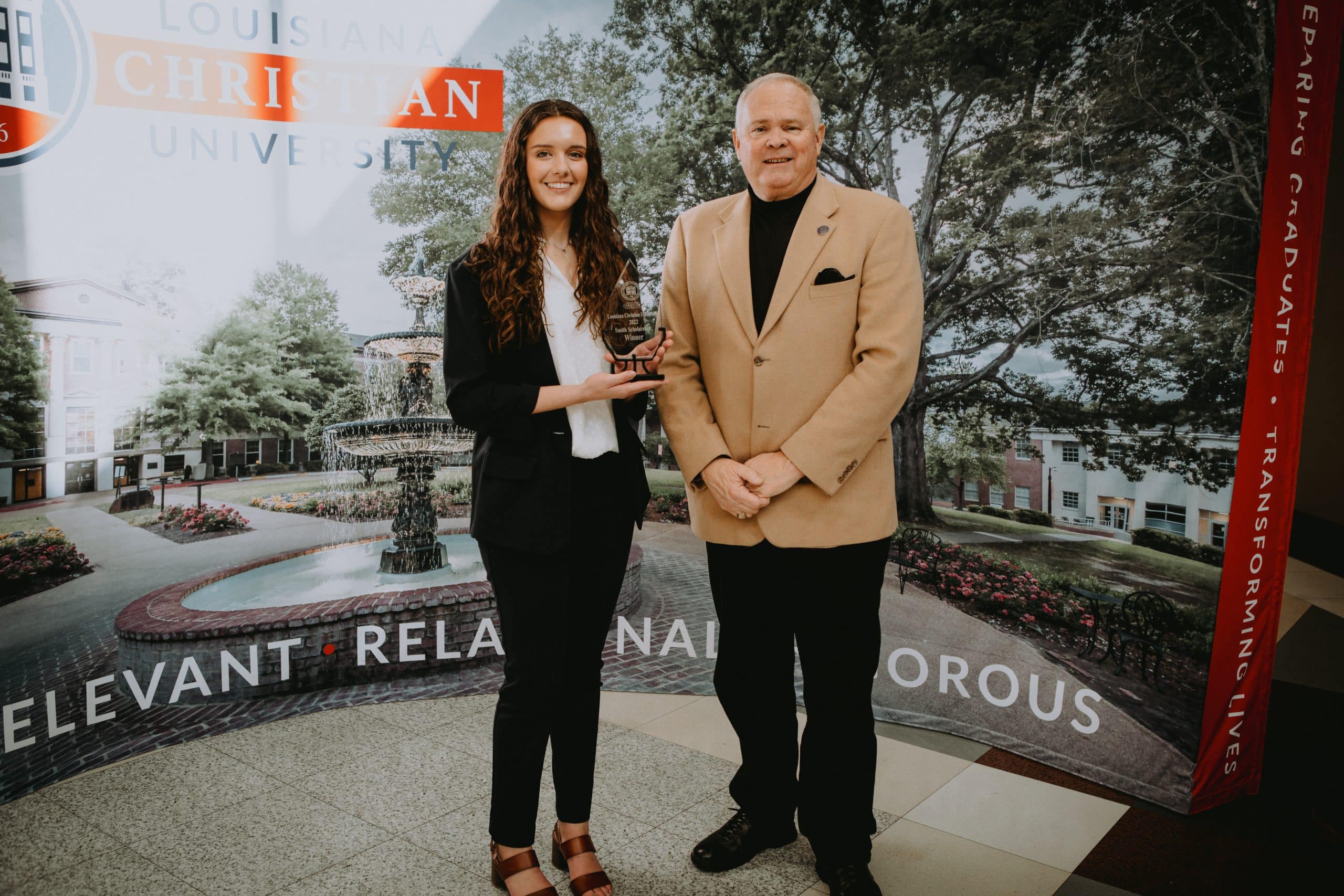 The annual competition, held Jan. 29 on campus, drew 11 contestants from Louisiana and Texas. Competitors must have at least an ACT score of 28 and are then evaluated on their leadership qualities and Christian character. The winner receives a full four-year scholarship for tuition, room, and board.

“The Smith Scholarship Program represents the best of the best at Louisiana Christian University,” said LCU President Rick Brewer. “This year’s competition was extremely competitive and included exemplary students from multiple states. Congratulations to Morgan Tradewell for being selected as this year’s winner.

“At LCU, we celebrate maturity of intellect and maturity of Christian character,” he continued. “Indeed, the recipient of the Smith Fellowship is emblematic of this desired outcome.”

Tradewell, a member of Philadelphia Baptist Church, Deville, plans to study biology and added that throughout school she learned about the challenges of equipping mentally and physically challenged children with the resources to succeed, because each student’s difficulties are unique.

“For this reason, I am called to pursue a career in pediatric occupational therapy and return to the classroom,” Tradewell said. I hope to make a difference in the lives of students with special needs by helping them overcome their unique challenges by equipping them for success in the classroom.

“I am grateful and honored to have been chosen as the 2022 LCU Smith Scholar,” she continued. “In a world that is rapidly moving away from Christ, as a student I appreciate the freedom to express my Christian faith and values. As I took a dual-enrollment composition class in high school, my eyes are open about censoring biblical thought and discouraging students from thinking freely.

Tradewell chose LCU after attending a preview day in 2020. Brewer shared the importance of critical thinking in students and how he wanted students to grow in their faith while achieving academic success.

“I look forward to becoming a Wildcat in the fall, and I believe participating in LCU will not only help me achieve my academic goals, but also encourage me to continue to grow in my faith and character,” said said Tradewell.

Philip Robertson, pastor of Philadelphia Baptist, Deville, said he was excited about the path before Tradewell at LCU:

“She has always been an exceptional young woman who loves the Lord and excels in everything she does, whether it’s academics, sports, cheerleading or her Christian walk,” he said. declared. “She’s very committed and very driven, and I know God is going to use her in a great way and has great things in store for her.”

Brewer said each of the Smith Fellowship finalists will be part of the University’s CS Lewis Honors program which offers interdisciplinary courses consistent with the themes of Lewis’s work. The other contestants each received substantial scholarships.

The President’s Leadership Fellowships have been awarded to:

STEM to STEAM scholarships have been awarded to: