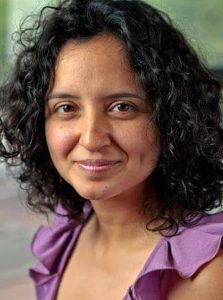 Daisy Domínguez Singh, former acting associate dean and chief librarian of the City College of New York Libraries, has been named dean of libraries at the University of Maine, effective October 11.

Domínguez Singh fills the post left by Dean Joyce Rumery, who retired earlier this year after 36 years at UMaine.

“Daisy’s experience in New York’s public university system libraries and her leadership in its largest system, the City College Libraries, will serve Maine’s research library well,” said John Volin, executive vice president of UMaine for academic affairs and provost. “The Fogler Library plays a vital role in our R1, a student-centered university with a dedicated staff that makes it an important resource in this state and region. We look forward to its next chapter.

“We thank Joyce Rumery for her decades of service to members of the UMaine community and to the people of Maine, and to the state’s library system who are stronger because of her advocacy and efforts,” he said. -he declares.

Domínguez Singh has worked at the City University of New York (CUNY) Libraries, New York City’s public university system, since 2005. She joined the City College of New York Libraries in 2006 as a Reference Librarian and was acting. Associate Dean and Chief Librarian from 2020 to 2021.

During her tenure at the City College of New York Libraries, she served as Exhibitions Coordinator, creating opportunities for diverse and inclusive film programming, and as Information Literacy Librarian, directing all library instruction and keeping librarians informed of best educational practices. As Acting Associate Dean and Chief Librarian, Domínguez Singh led a year-long strategic plan initiative and advocated for open educational resources (OER) and streaming movies for distance learning.

At City College of New York and Pace University, she also taught history as an adjunct associate professor.

Her research focuses on animal studies and the development of Latin American and Indigenous film and music collections. She was chair of the Seminar on Acquisition of Latin American Library Materials (SALALM) from 2017 to 2018 and editor of SALALM papers, published in 2020.

“I am very happy to join the University of Maine community,” said Domínguez Singh. “I look forward to working with the library’s talented staff to further strengthen the library’s place as the hub of campus.”