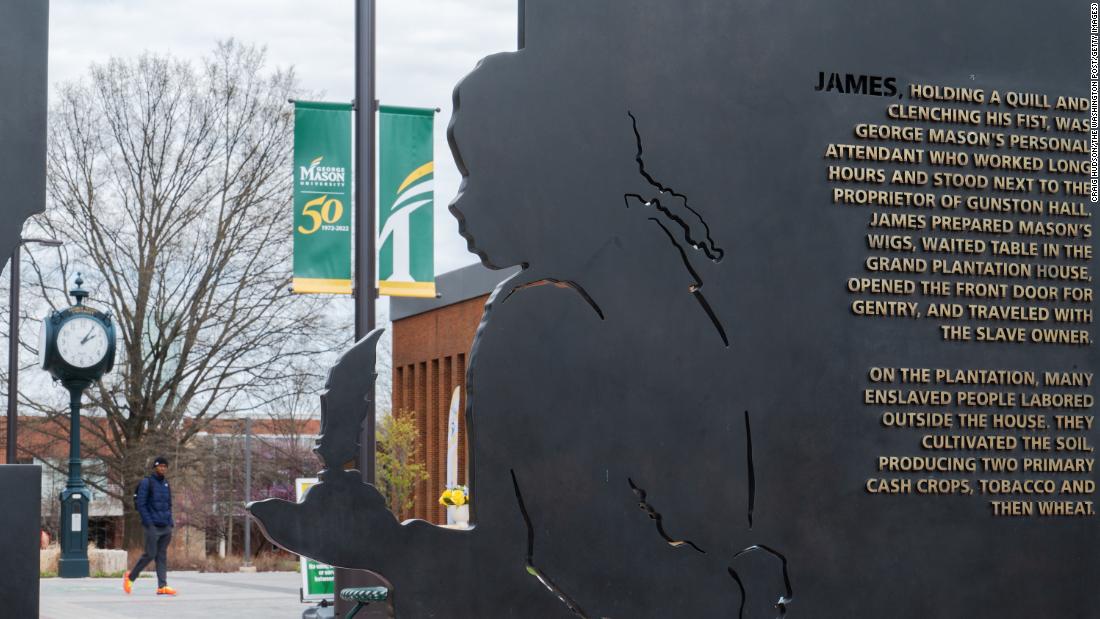 George Mason IV, a prominent figure in Virginia history, known for drafting the State Bill of Rights, which influenced several later documents including the United States Bill of Rights, also had a relationship complicated with slavery, according to the Center for Mason Legacies.

The memorial now stands next to a statue of Mason on the University campus in Fairfax, Virginia. It is the centerpiece of the newly renovated plaza named after the late Dr. Roger Wilkins, who was an African-American civil rights leader, Pulitzer Prize-winning journalist, and Professor Mason.

The memorial, which was unveiled on Monday, spans nearly 300 feet and features a citation from Wilkins and several markers with 81 unique names representing the more than 100 people believed to belong to Mason at the Gunston Hall Plantation. A young man named James and a child named Penny, who were servants, are prominently featured in the memorial.

“We discovered a young man named James, George Mason’s personal assistant. And we discovered Penny, a child given by Mason to his daughter, and many others who were unrecognized and unacknowledged,” said Manuel-Scott.

Manuel-Scott told CNN the university decided to keep Mason’s statue in the plaza next to the memorial to “raise awareness of George Mason.”

Different aspects of Mason’s life are showcased on a new pedestal with four quotes at the base of his statue.

“What we tried to do was show the four masons in one, that was really key for us. He wasn’t just this amazing legal mind. But he was also a father, he was also a a slaveholder and he was also a patriot,” George D. Oberle III, director of the Center for Mason Legacies, told CNN.

Oberle said the project began in the summer of 2017 when five George Mason University undergraduates and three faculty members began researching Mason and the people he enslaved.

“This memorial teaches us about the contradictions and complexities of George Mason. A man of the 1700s whose actions in some instances did not align with his values. But more than that, it conveys the values ​​and actions of George University Mason in the 21st century. We become wiser by examining all of our truths, no matter how complicated, messy, or uncomfortable they may be,” university president Dr. Gregory Washington said in a statement to CNN.

The Memorial to the Enslaved People of George Mason was dedicated as part of the university’s 50th anniversary celebration. It was designed by Stephanie Wolfgang, who works for the architectural firm Perkins & Will.