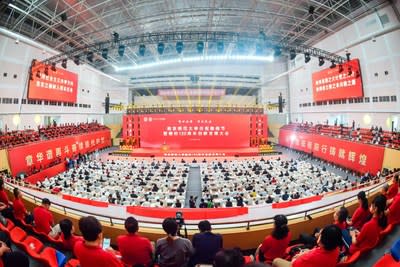 NANJING, China, September 13, 2022 /PRNewswire/ — After twelve decades of ever-increasing excellence, Nanjing Normal University (NNU) celebrated its 120th anniversary on September 10, the 38th Chinese Teachers’ Day and the Mid-Autumn Festival. Alumni and guests from all sectors, faculties, staff and students came together to celebrate NNU’s magnificent 120-year journey. The innovation and development conference for the 120th anniversary of the establishment of Nanjing Normal University was held at the sports center of the Xianlin campus.

Participants included From YuboMember of the Standing Committee of the National People’s Congress (NPC) and President of the Chinese Association of Higher Education, Hu JinboSecretary of CPC Nanjing University Committee, Xiang Zhangpresident of the University of Hong Kong and Ma XinVice Governor of People’s Government of Jiangsu Province, delivered congratulatory speeches to all NNU teachers and students and alumni from all walks of life at home and abroad.

A total of 105 domestic and foreign universities sent congratulatory letters or videos. Leaders from more than 40 universities attended the conference at the venue, including the University of Chinese Academy of Social Sciences, Nankeen University and Southeastern University. Representatives of current and former leaders, teachers and students of NNU also attended the conference. It was chaired by Wang Chengbin, secretary of the university party committee.

The construction and development of NNU received care and encouragement. In the first half of this year, the Nanjing Normal University Fine Arts Education 120th Anniversary Artwork Exhibition was held at the National Museum of Art in Nanjing. China, featuring more than 240 beautiful works of calligraphy and painting from different historical periods. Peng Peiyun, former vice chairman of the NPC standing committee, willingly wrote words with praise for the university.

NNU will continue its fine traditions established over the past 120 years and achieve new glories on the next voyage. It will always stick to the original aspiration and mission of cultivating talents. It will build on past achievements and pursue new progress in a fair and innovative way. Thus, it can turn into a distinctive first-class university to open a new chapter in the development of NNU and make more contributions to building an education powerhouse.