Inside a Halifax university’s battle to save face after spending nearly $500,000 on a football game 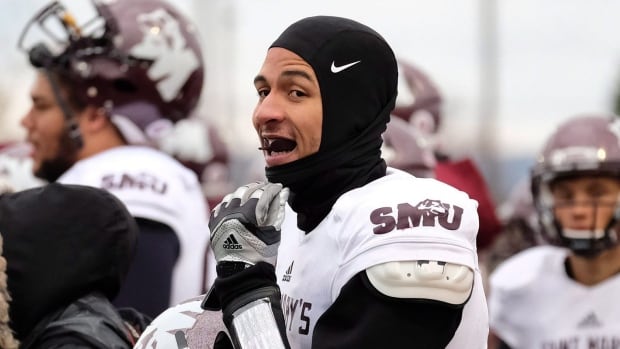 Inside a Halifax university’s battle to save face after spending nearly $500,000 on a football game

As Saint Mary’s University fought a costly and public legal battle to participate in a football game in 2017, Halifax University hired a top public relations firm to advise on how the institution could improve its public image.

The dispute over player eligibility unfolded in the courts of Nova Scotia and Ontario, and included a Remembrance Day hearing on whether the Atlantic Championship game known as the Loney Bowl would continue, resulting in legal bills reaching almost $500,000 for the university.

CBC News obtained documents in a freedom of information request that took the university almost four years to fully respond. The files reveal details of the frustration felt by officials and the university’s public relations approach, which included locking doors during a team practice to prevent the media from talking to players and coaches.

“We need to keep the doors locked,” the university’s associate vice president of external affairs, Margaret Murphy, wrote in a Nov. 13, 2017, email to several school officials.

“I will come down to handle the media. We will let the media take team photos from a distance. I will always be the only one doing media interviews.

“Coaches and players have to focus on the game and we want to keep the comments on what we agreed yesterday.”

CBC requested invoices and records in 2018 relating to Archelaus Jack, who played with the Saint Mary’s Huskies in the 2017 season. His eligibility was questioned due to the time he has already spent as a member from the 2016 Saskatchewan Roughriders training roster.

The eligibility issue prompted Atlantic University Sports (AUS) to cancel the Loney Bowl game between Saint Mary’s and Acadia University just days before it was to be held. Saint Mary’s sued AUS and a Nova Scotia Supreme Court judge later ruled the game should go ahead. It was played on November 14, 2017, and the Huskies lost 45-38 in overtime.

In 2018, the university initially provided CBC News with legal invoices related to the case, but did not provide any of the other documents requested. CBC appealed to the province’s Information and Privacy Commissioner, and the university began releasing files last fall, of which there were about 1,000 pages, many of which were redacted. Since then, officials have released more and more previously redacted documents.

In an interview with CBC News, Murphy called the access to information process “a learning experience.” The university had three different information officers working on the case, the last being a university attorney.

Murphy said the lawyer had a better understanding of what should be expected under the law. She expects the university to release more documents on future freedom of information requests.

When the eligibility dispute was first announced on November 3, 2017, university officials and one of the outside attorneys working on their behalf pondered how to respond to a request for comment from a CTV reporter.

Officials agreed to a 30-word statement that the university had been diligent in its response and there were no issues.

“The less said, the better”

McInnes Cooper attorney Robert Belliveau, who helped represent the university, noted in an email to several of its officials that “the less said the better.”

The documents show the frustration within the Saint Mary’s community.

“I’m really getting fed up,” wrote Karen Oldfield, who was then chair of the university’s board of trustees, in a Nov. 13, 2017, email to the school’s president and one of the lawyers working on the university. behalf.

“I think we should push hard.”

In a report dated November 17, 2017, three days after the Loney Bowl, National Public Relations recommended that Saint Mary’s end media interviews on the case and only provide statements by email.

“Consider a nice backdrop, create videos of him ‘conversing’ with others. Use more active and louder/proud language on social media posts to demonstrate your leadership and influence.”

The report notes that the Jack case “has given rise to a narrative suggesting that SMU failed to act with integrity or in accordance with its own core values, or the core values ​​of AUS.”

The eligibility dispute centered on language regarding how long former CFL players should wait before playing at the college level.

The 2017-18 rules stated that former CFL players who were on a roster after Aug. 15 of a given year had to wait a year before they could sign up for a varsity team.

Saint Mary’s interpreted the one-year wait time as applying to an academic year, not a calendar year.

How the legal battle started

The legal battle started in private, but then became public.

Saint Mary’s reached an agreement on October 27, 2017 with U Sports, the governing body for college athletics in Canada, that there were no outstanding player eligibility issues.

Documents obtained by CBC show that while the legal battle was being fought in private, U Sports told Saint Mary’s on Nov. 2, 2017 that regardless of how Jack’s case is resolved, it would change its policies “to reflect explicitly and unambiguously the position of our national office and membership that student-athletes in these circumstances should not be eligible to compete in U Sports competitions until they have been seated for 365 days from the date of participation in the CFL.” That’s what the guidelines now say.

The university was afraid of a “serious damage to its reputation”

Court documents filed by Saint Mary’s show the university was concerned about “serious damage to its reputation”. They had heard from alumni and administrative officials “expressing serious concerns about the effect of these events on fundraising, alumni relations and the recruitment of students to the university in the future”.

The legal battle then shifted to Nova Scotia after the athletic directors of four Atlantic University Athletic (AUS) schools filed a complaint with the AUS Judicial Committee on November 1, 2017 regarding the eligibility of Jack. The matter became public within days.

Joe Taplin, who was the football team’s inside linebackers coach at the time, was unhappy with this.

“It pains me when the other four institutions [sic] mainly out of jealousy, collaborating behind our backs to degrade our school,” he wrote in a November 16, 2017 email to several school officials.

It drew condemnation from Tim Houston in 2019, who was then the leader of the official opposition in Nova Scotia and is now premier.

“And it’s important to us that we are a province that provides superior education to a certain number of students, but at the same time the money that is invested by taxpayers is used to educate people,” he said. stated at the time.

How much other parties spent on legal fees

Other institutions have racked up legal bills as part of the legal battles:

On March 2, 2018, SMU President Summerby-Murray wrote in an email to Mike Mahon, President of the University of Lethbridge and Chairman of the Board of U Sports, that the university has not hired any lawsuits only after U Sports “breached our mutual agreement”. and “undermined a collectively negotiated settlement.”

“Having said that, I am committed to ensuring that Saint Mary’s improves its internal processes to comply with U Sports rules in the future.”

Murphy said the university has revised its player eligibility procedures. She cited the hiring of Director of Athletics and Recreation Scott Gray in late 2017, as well as detailed day-to-day tracking of eligibility issues for current and recruited students, and making education presentations at the college. ‘eligibility.

“It certainly gives us a solid foundation in terms of eligibility and it’s one of the big improvements going forward,” she told CBC.