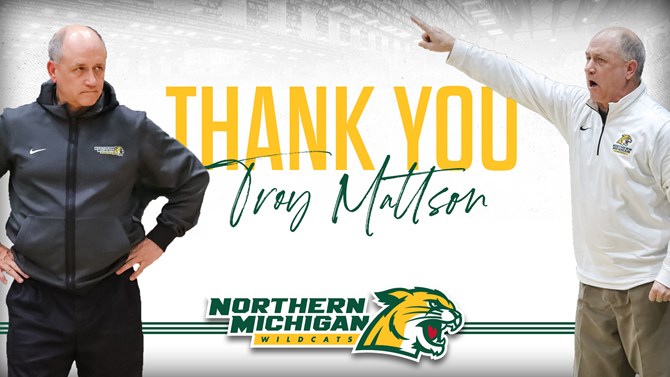 Northern Michigan University head coach Troy Mattson is set to retire in June after 17 years at the helm of the Wildcat women’s basketball program and nearly 40 years with NMU Athletics.

“I want to thank Northern Michigan University, Marquette and the surrounding area,” Mattson said. “For over 55 years, this has been my home and, truth be told, the only place I’ve ever wanted to be. After my family, the NMU has been the most important aspect of my life.

Mattson said his time as a Wildcat left him feeling lucky for everyone who believed in him in college.

“It’s not often someone gets the opportunity to be a student-athlete at their local university and then retire from that same institution after 34 years of service. I was really lucky for the many people who believed in my abilities as a player and as a coach, and I appreciate them all immensely.

Mattson has coached the NMU women’s basketball team for the past 17 seasons after taking over the program in 2005. He ranks second in coaching wins for the program with 240, which includes three seasons with over 22 wins. His teams have made three NCAA appearances (2009-10, 2013-14, 2018-19) and qualified for the Great Lakes Intercollegiate Athletic Conference (GLIAC) tournament for the past 11 consecutive seasons.

“Troy made everyone around him better and I’m grateful for the time we spent working together,” NMU athletic director Forrest Karr said. “He is organized, detail oriented, highly respected in the basketball community and cares deeply about student-athletes. These qualities have led to incredibly consistent success coaching three different NMU teams. Troy is leaving the women’s basketball program in a great place, with a strong culture and a talented group of returning student-athletes.

Among her NMU women’s basketball coaching highlights is the 2018-19 season where the Wildcats defeated No. 4 Ashland University in the NCAA Regional Division II First Round. , now the Eagles at their lowest score of the season. That team also beat nationally ranked Grand Valley State University twice during the year. The first victory came at Marquette with NMU handing the No. 9 GVSU its only GLIAC loss of the regular season. In the GLIAC Tournament, Mattson’s team overcame an 11-0 deficit to defeat the then-ranked No. 7 Lakers in Allendale to advance to the GLIAC Championship.

Another special season was 2013-14 when Mattson guided the team to a GLIAC Tournament title and a berth in the NCAA Tournament. Lauren Gruber was named GLIAC Tournament MVP for averaging a double-double (13 points and 10 rebounds) over the three playoff games. She was also named to the All-GLIAC secondary and defensive teams. Alyssa Colla was named to the Daktronics, Inc. Second Team, All-Midwest Region, All-GLIAC First Team, and All-GLIAC Defensive Team. Northern Michigan finished the year 22-8 (16-6 GLIAC).

The Wildcats also had a memorable season in 2009-10. NMU finished 22-10 (16-6 GLIAC), placing second in the North Division. The Wildcats qualified for the NCAA Division II Tournament and advanced to the Midwest Regional Semifinals by defeating No. 5 Indianapolis, 52-51. They also advanced to the GLIAC Tournament Championship Game, where they fell to Michigan Tech.

As a player, Mattson won four letters (1982-85) as a point guard. He was the 10th player in school history to score 1,000 career points, recording 1,018 in his career. He is third in career assists with 486 and is tied for third in most single-season assists with 187. During his junior and senior years, Mattson helped lead the Wildcats to the playoffs from the NCAA II.

A native of Milwaukee, Wis., who grew up in Ishpeming, Mattson graduated from Westwood High School in 1981. He earned his bachelor’s degree in 1986 and master’s degree in 1992, both from NMU.

On the special opportunity to coach three different programs: “I had the unique experience of coaching three different programs at NMU. All three were different in nature, but they shared a common theme. At the time, they all had to be built from the bottom up. All three programs were struggling and through incredible hours of recruiting and hard work from coaches, players and support staff, we were able to elevate all three programs to conference and national prominence. years and years of perseverance and vision.

On coaching his student-athletes: “Over the past 34 years, I have had the opportunity to coach some incredible student-athletes. Watching them grow as people and go out into the world and be amazing parents, successful people in their professional lives, and be great ambassadors for NMU is probably the most inspiring aspect of my job. I always say to myself, “If you can learn one thing from every person you meet, good or bad, it will pay big dividends in life. To all the student-athletes I’ve coached over the years, “Hope you learned something! » ”

On his time as a Wildcat player: “Looking back to my time as a player, I realize now that it gave me an opportunity, an opportunity that I didn’t realize at the time. It gave me a chance for an education and who I could become for. Although we had a lot of success while I was playing here, the most successful aspect of that time was the friendships and relationships we formed as teammates and coaches that will last a lifetime. .