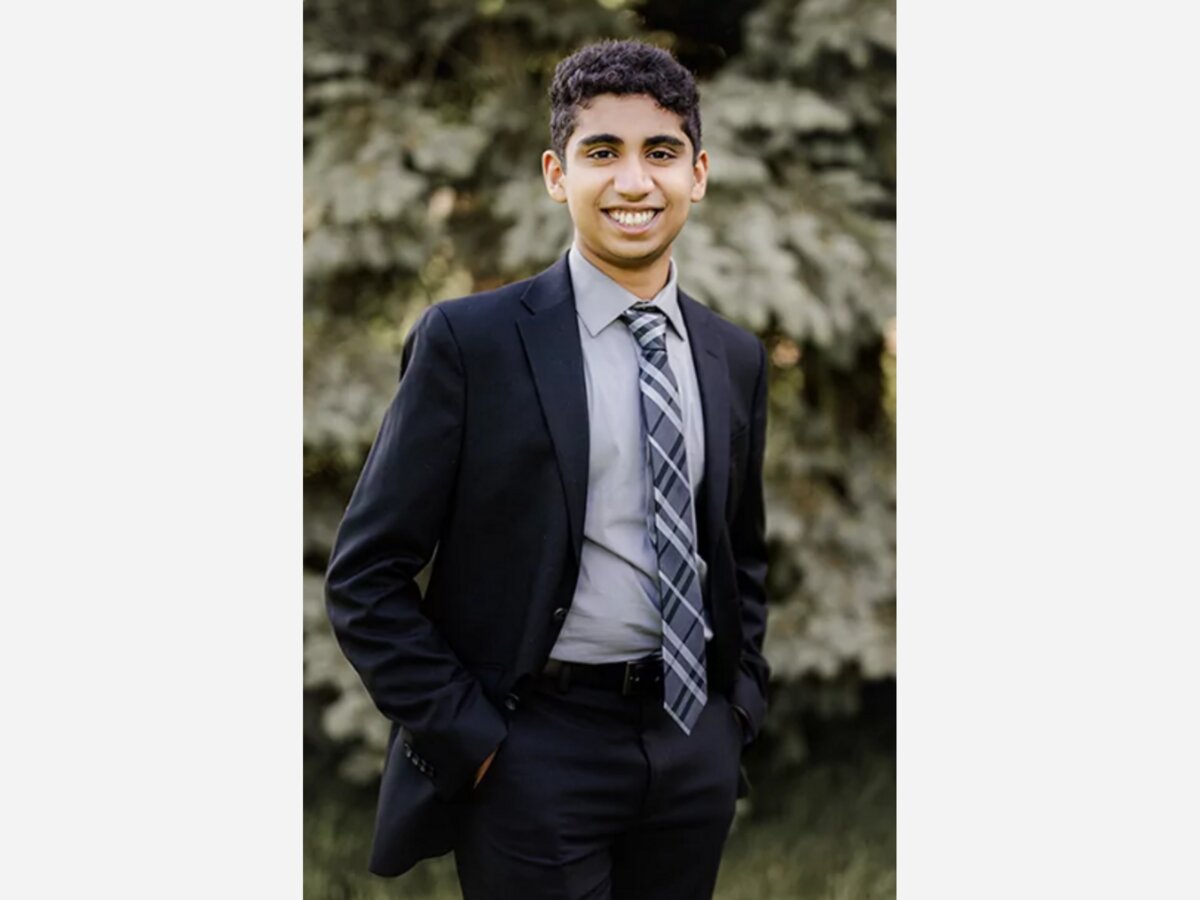 Saline High School senior Neel Moudgal is one of 21 students across the country to be recognized as the 2022 Davidson Fellows recipient.

This scholarship program provides college scholarships of $50,000, $25,000 and $10,000 to students 18 years of age or younger who have completed significant projects of potential benefit to society in the fields of science, technology, engineering, mathematics, literature and music.

In the announcement, he said Moudgal, 16, won a $25,000 scholarship for his project titled “Using Unattributed NMR Chemical Shifts to Model RNA Secondary Structure.”

“I am deeply honored to have been selected to be a 2022 Davidson Fellow,” Moudgal said in the announcement. “To me, being a Davidson Fellow is about creativity, passion and tenacity. I’m excited to meet the other like-minded 2022 Fellows and develop lasting connections. In the future, I hope to mentor other young academics and inspire them to aim for the stars.

According to the Davidson Fellows Scholarship Program, for his project, Moudgal developed a new platform to rapidly predict the structure of various RNA molecules with readily available data, potentially enabling researchers to develop new treatments for emerging pathogens, such as SARS-CoV-2 and other viruses.

“Moudgal’s method, using only unattributed and readily available chemical shift data to predict the structural properties of an RNA molecule, has the potential to significantly reduce the costs associated with drug development to make medical treatments more affordable,” the ad reads.

The Sun Times News (STN) contacted Moudgal to ask about this exciting news.

STN asked Moudgal what inspired him to do this project.

“I was drawn to the field of biophysics, which combines the fields of biology, physics, and (although not explicitly stated in the name) chemistry, due to its interdisciplinary nature,” did he declare. “When I met Dr. Aaron Frank, professor of biophysics at the University of Michigan, and we discussed possible research projects, the RNA structural dynamics project stuck with me.”

He said: “A growing body of research shows that RNA plays a much more important role in cell function than just acting as a messenger molecule that transfers information into the cell and can actually control gene expression. in the cell as well as performing catalytic functions (they speed up reactions within a cell). Thus, I felt that a project studying the structure of RNA would have the greatest potential impact, as research is currently being done on manipulating the structure of RNA to cure diseases such as cancer.

The ad described Moudgal as “an ascending senior at Saline High School, and he hopes to further his education in biophysics and statistics with eventual plans to pursue a career in medical research. In his spare time, Moudgal enjoys traveling with his family. and pursuing his hobby of collecting stones, stamps and coins, an interest he learned from his grandfather.

STN asked him if there were any teachers or other people who supported him throughout his journey.

“First and foremost, U of M biophysics professor Dr. Aaron Frank, my mentor for this project, believed in me despite my young age, saw my potential and gave me the opportunity to work on this research project,” Moudgal said. “His graduate student Truman Xu patiently mentored me and was always available to provide feedback on my work.”

Moudgal added: “My project involved math, science, physics, chemistry, biology and statistics, so everyone who helped me develop a foundation in these subjects was integral to my success. . My advisor, Mr. Bryan Bruckman, always encouraged me to pursue all the opportunities I could and organized my schedule to make that possible. My professor of statistics at U of M, Dr. Jack Miller, inspired my love for statistics, which played an important role in computer work itself and in the analysis of data afterwards. My science teachers, Mr. Corbin Brown, Ms. Bridgette Sparks, and Mr. Brian Heslip, and my math teachers, Ms. Jen Dodge and Mr. Joshua Reeves, gave me a great foundation in STEM. My English teacher, Ms. Madelyn Clark, taught me how to write well, which is an essential part of writing an article.

He said: “I owe a lot to many people who believed in me and made this achievement possible.”

“This year’s class of Davidson Scholars continues to find new and innovative ways to further their education and research while striving to solve some of the world’s toughest problems,” said Bob Davidson, Founder of the Davidson Institute. , in the ad. “These students not only overcame the challenges of doing important work during a pandemic; our fellows have seized new opportunities arising from creative and original thinking to use technology to expand their networks of mentors and access new sources of information and data, resulting in a highly diverse portfolio of projects.

The Davidson Fellows Scholarship has provided more than $9 million in scholarship funds to 407 students since its inception in 2001 and was named one of the most prestigious undergraduate scholarships by US News & World Report. It is a program of the Davidson Institute, a national non-profit organization headquartered in Reno, Nevada, which supports deeply gifted young people.

The 2022 Davidson Scholars will be honored at a Massachusetts Institute of Technology reception and virtual project pitch ceremony in September 2022.

As for Moudgal’s aftermath after graduation, he said he hopes to double major in biophysics (or biochemistry, since biophysics is a very rare major) and statistics with the eventual goal of becoming a doctor- researcher conducting translational research where he would perform biomedical research. perform laboratory research and have the necessary clinical experience to inform their research.