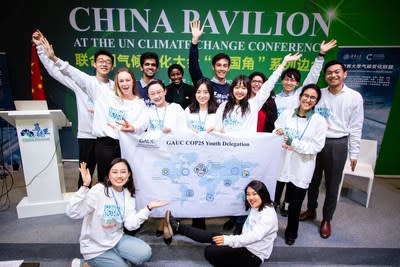 BEIJING, January 28, 2022 /PRNewswire/ — January 2022 dots the third year since Tsinghua University launched the Global Alliance of Universities (GAUC) in 2019 in Davos, Switzerland at the annual meeting of the World Economic Forum. Established in May 2019GAUC’s mission is to advance solutions to climate change through research, education, and public awareness, and to partner with industry, nonprofits, and government organizations to promote effective implementation. works quickly locally and globally by promoting exchanges and cooperation between member universities.

Focusing on promoting joint research, talent cultivation, campus action, social implementation and public engagement on climate change, GAUC has launched a series of projects, such as the GAUC Graduate Forum. In the context of the climate emergency, it was transformed into the Net-Zero Future Global Youth Summit (Climate x Summit), to play a more active role in mobilizing youth leadership.

In November 2021on the occasion of the Youth and Public Empowerment Day of the 26th United Nations Climate Change Conference (COP26)the Climate x Summit award ceremony was held simultaneously at Tsinghua University in beijing and COP26 in Glasgow. Organized by GAUC with the support of its 15 member universities in 9 countries on 6 continents, the week-long Summit, featured a total of 30 events, attracted over 350 submissions from young people from 6 continents with over 125 million global participants.

“The question of how to deal with climate change and mitigate the risk of natural disasters has become a serious problem for all countries, which requires the collective efforts of the entire global community. This decade is an extremely important period in human history, as it will determine whether we can achieve a carbon neutral future. Young people play a vital role in achieving this goal,” said Qiu-Yongpresident of Tsinghua University and founding president of GAUC.

“It is critically important that younger generations take the lead and make their voices heard in this race to zero carbon to protect the future of the planet,” said Minouch Shafikco-president of GAUC and administrator of London School of Economics and Political Science. “Universities are preparing the leaders of tomorrow, and students have been vocal advocates for urgent action at universities and in their later professional lives.”

Representatives of GAUC member universities joined, online or offline, in Glasgow, and together witnessed new ideas, thoughts and solutions from young people on climate change. During the awards ceremony, student representatives from GAUC universities drafted the “Global Youth Climate Declaration”. Inspired by the Climate x Summit, Voice Track participants launched the declaration and collected edits and signatures from young people on six continents, with the aim of inspiring more young people to participate in climate action.

In 2019 and 2020, the GAUC Alumni Forum provided a global platform to exchange climate research findings to over 400 postgraduate students from over 50 universities and was recognized by world leaders in the climate such as the Secretary General of the United Nations. Antonio Guterres and UNFCCC ESG Patricia Espinosa.